Africa is leading the world in plastic bag bans

As of June 1, travelers to Tanzania now have to pack very carefully. The country announced the implementation of the second phase of its plastic bag ban on May 16. Visitors are advised to avoid packing or carrying any plastic bags as they’ll have to leave these at a designated desk in the airport.

The first phase of the country’s anti-plastic initiative began in 2017 to “protect the youth and environment,” with an initial ban on the manufacture of plastic bags and in-country distribution. Phase two extends to tourists. “The government does not intend for visitors to Tanzania to find their stay unpleasant as we enforce the ban,” said a statement from vice president Samia Suluhu’s office. “However, the government expects that, in appreciation of the imperative to protect the environment and keep our country clean and beautiful, our visitors will accept minor inconveniences resulting from the plastic bags ban.”

There are exceptions to the new rule for medical, industrial, construction, agricultural, and waste management packaging, as well as for the small “ziploc” bags used to carry toiletries (as long as these leave the country when the visitors do). Still, Tanzania aims to be plastic bag free, and it’s just one of 34 African nations fighting against single-use plastics with such bans.

In fact, the African continent is leading the world in plastic bag regulations. Notably, 31 of these bans have been passed in sub-Saharan Africa, the globe’s poorest region, as Laura Parker reported for National Geographic in April.

Kenya’s efforts, initiated in 2017, have led to a “visibly cleaner” country, Parker writes: “Bags that once hung like windblown shrouds from tree branches are fewer in number, as are clumps of bags that clogged drainage systems and created breeding pools for malaria-bearing mosquitoes.”

In Kenya, the penalties for ignoring the ban are the world’s most punitive. Manufacturers, importers, distributors, and users found with plastic bags face up to $38,000 in fines or four years in prison. The ban has faced resistance, and enforcement is also a problem—it’s spotty, which means that plastic bags are still circulating despite the potential penalties. Still, in a country that once used about 100 million plastic bags a year, according to UN estimates, the reduction efforts are notable and seem to be effective. 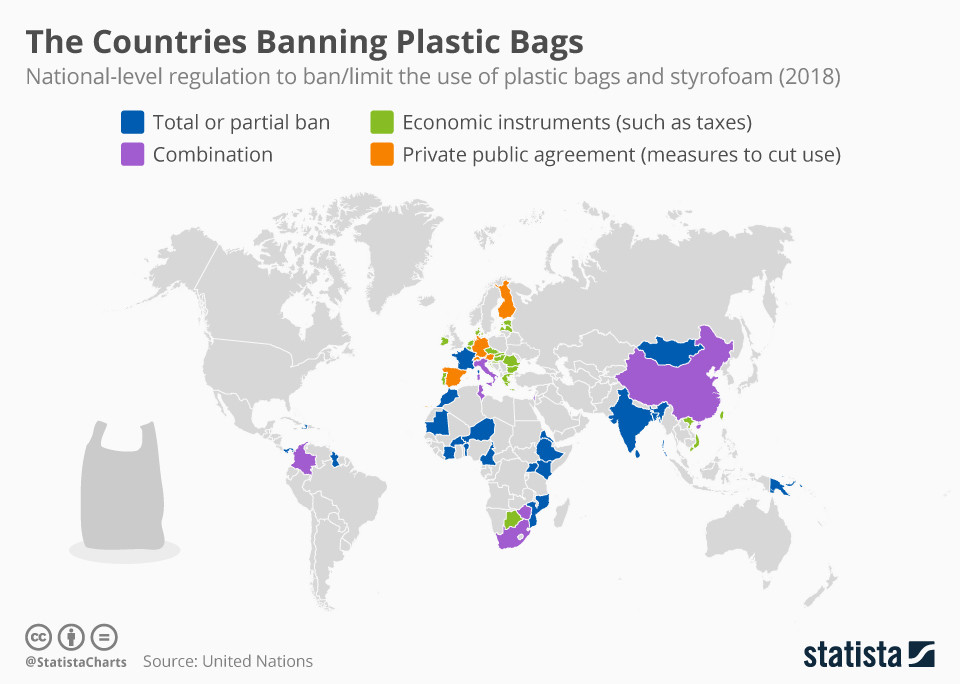 Rwanda is aiming to be the world’s first plastic-free country, and its prohibitions appear to be working. The UN named the country’s capital, Kigali, the African continent’s cleanest city, thanks in part to a 2008 ban on non-biodegradable plastic.

This month, a UN environmental study concluded that plastic bag bans are working and are especially effective in African nations where waste is often burned. Indeed, about 40% of the world’s waste is burned, which causes toxic pollution. Burning plastics releases poisonous gases that threaten the health of vegetation, humans, and animals. “Burning of plastic waste increase the risk of heart disease, aggravates respiratory ailments such as asthma and emphysema and cause rashes, nausea or headaches and damages the nervous system,” the study notes.

Reducing plastic bag use then has two effects: It minimizes the creation of waste, much of which drifts and ends up in the world’s oceans, harming marine life, and it reduces the air pollution caused by burning single-use plastics.

In places without any such prohibitions, waste is a major problem. Ghana is the world’s <a data-hook="linkViewer" href="https://qz.com/1179387/africas-economic-outlook-is-promising-for-2018-but-there-clouds-on-the-