Canada’s Inuit people, whose lands occupy the remote northeastern region of Nunavut, live in an Arctic wilderness of raw natural beauty that is now under threat from climate change.

Prime Minister Justin Trudeau has just turned the area into one of the world’s largest conservation areas, to counter the effects of rising temperatures on Arctic marine life and the indigenous people that call it home.

The initiative aims to build a conservation economy, which pairs environmental concerns with economic opportunities for local communities. New jobs will be created, accompanied by stewardship programmes aimed at boosting monitoring and conservation of both the land and cultural sites.

In designating the new zone, Trudeau claims to have exceeded his government’s target of protecting 10% of Canada's marine and coastal areas by 2020, reaching 14% a year ahead of schedule. 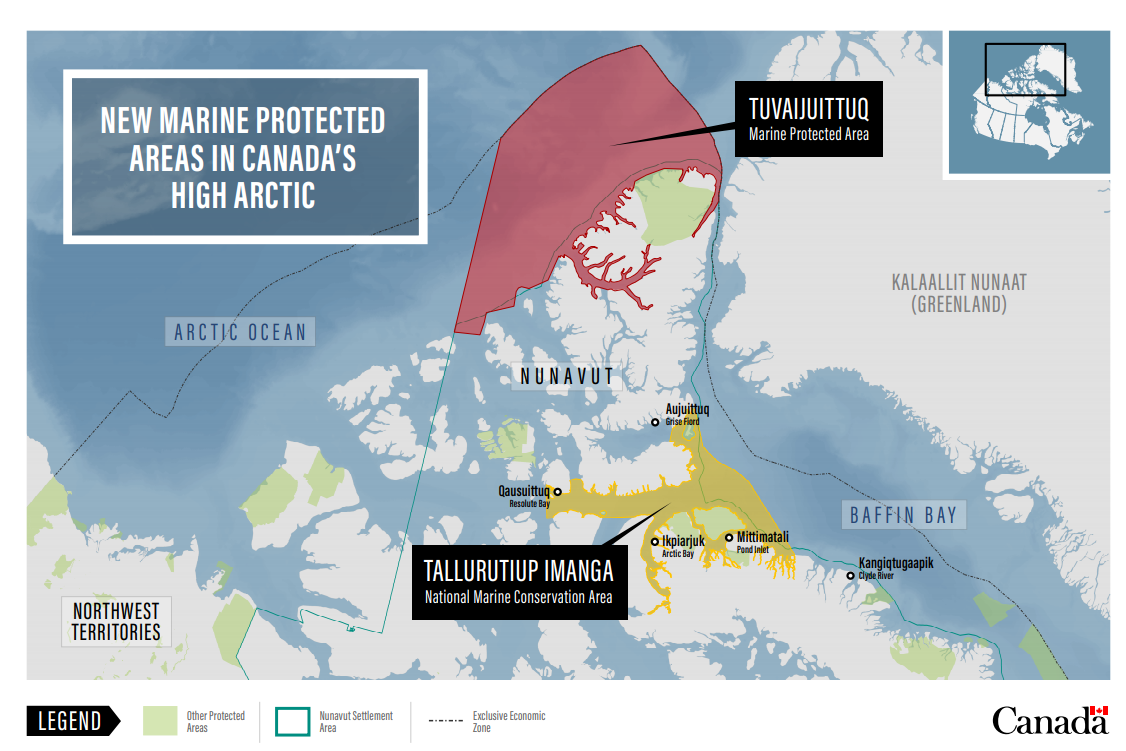 The Tuvaijuittuq Marine Protected Area (denoted in red above) covers an area nearly the size of Germany, according to the World Wildlife Fund.

The zones lie within an area of Canada’s high Arctic and Greenland, which is expected to become the last surviving area of summer sea ice in the Arctic.

A large part of the Arctic’s ice is melting - and fast. Northern Canada is warming twice as fast as the rest of the planet, causing sea ice to disappear at an alarming rate, according to a recent study by climate researchers.

Permafrost, which has remained frozen for millennia, is melting 70 years ahead of forecasts.

Canadian researchers predict that most Canadian Arctic marine regions will be free of summer ice by 2050, which could be devastating for the Arctic ecosystem.

What happens in the Arctic has serious repercussions for the rest of the planet, disrupting ocean currents and causing sea levels to rise. But the immediate impact of climate change is being felt closer to home.

Inuit people use the sea ice as a bridge to travel and hunt. While sea birds and marine creatures, such as whales, polar bears and seals, depend on it for survival.

The scale of the summer thaw is allowing more ships to enter the region, putting animal habitats under increasing threat.

And while the conservation zone should restrict the region’s exposure to industrial fishing, mining and drilling for oil and gas, such activities could still pose a threat to the wider marine environment.

The Canadian government has committed billions of dollars to the project, which would carry crude oil from inland Edmonton across British Columbia to the port of Burnaby, on the west coast.

Transporting the oil to the markets of Asia, instead of the US, would significantly increase shipping in the Pacific Ocean, disrupting the area’s marine ecosystems.

While approving the project, the National Energy Board concluded that increased shipping was likely to adversely affect the Southern Resident killer whale population, while exacerbating global warming by fueling a significant rise in greenhouse gas emissions.

The last four years have been the warmest ever recorded, according to NASA. Without urgent action to reverse man-made climate change, summer Arctic sea ice could soon retreat for the last time.