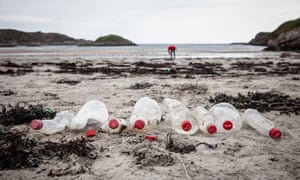 Coca-Cola bottles and cans are the most commonly found items of packaging pollution on British beaches, making up nearly 12% of all litter, research by Surfers Against Sewage (SAS)has found.

The results came from a series of 229 beach cleans organised by the anti-pollution campaigning group in April, which found close to 50,000 pieces of waste. About 20,000 of these carried identifiable brands, of which Coca-Cola was the leader, followed by Walkers crisps, Cadbury’s, McDonald’s and Nestlé.

When other brands owned by Coca-Cola were taken into account, the company’s share of the waste found rose to more than 15%. PepsiCo was the parent company to more than 10% of the branded waste found, followed by Cadbury’s owner, Mondelēz International, with about 7%. Identifiable packaging from McDonald’s accounted for 6% of the total with Nestlé just behind at 5.5%.

Hugo Tagholm, chief executive of SAS, said businesses must take responsibility for the waste associated with their products, citing new rules intended to force companies to prevent and remedy littering. “Producers must offer full transparency and disclosure on the amount and type of packaging they use. Our environment is in peril and plastic pollution is a clear indicator that business as usual just won’t do,” he said. “This is not a littering issue – business needs to provide radical and responsible new systems that drastically reduce their impact on our oceans, forests and nature at large.”

More than 45,000 volunteers took place in the Big Spring Beach Clean series of events in April that resulted in the biggest ever survey of beach litter in the UK, analysed by the consultancy Eunomia. The findings have been submitted to the government, which is considering ways to reduce the UK’s littering and packaging pollution problems through the