Cricket burgers and floating farms: is this Europe's most forward-thinking city? At BlueCity (bluecity.nl), on the north bank of the Nieuwe Maas in Rotterdam, it felt like I had stepped on to the set of a dystopian sci-fi movie.

The derelict Tropicana “subtropical swimming paradise” has been repurposed as a hub for a group of 32 entrepreneurs working within the “blue economy” – in which the waste products of one business are used by another. For example, RotterZwam grows mushrooms in the used coffee grounds from Aloha (alohabar.nl), a sustainable restaurant and bar also in BlueCity. Aloha in turn serves the mushrooms on its menu, created from Dutch-grown ingredients.

Mushrooms grown in coffee seemed pedestrian compared with the dish I had at Krekerij (krekerij.nl) – a burger made from crickets. The patty turned out to be rather good, with the crickets adding an appetising, nutty flavour. Insects use 95 per cent less water, 85 per cent less food and 90 per cent less land than traditional farm animals, making them arguably the most sustainable fast food on the planet.

In the basement I tried a selection of beers from Vet & Lazy (lazy.vet), a microbrewery that will this summer open a beer terrace overlooking the water at BlueCity.

In the meantime, brewery tours are available by appointment and the humorously named brews – including Je Moeder (“Your Mum”, flavoured with hibiscus and elderflower) and Fluffy India pale ale – are stocked across the city as well as at Aloha. In true blue economy fashion, Vet & Lazy is planning to make a beer flavoured with some of Krekerij’s crickets.

BlueCity (which plans to offer tours to the public in the near future) is full of surprises, but it isn’t the most radical example of sustainable food experimentation in Rotterdam. A 15-minute tram ride takes me to the world’s first floating dairy farm (floatingfarm.nl) in Merwe4Haven, a previously disused area of the old port in the west of the city.

By late spring, when tours of the solar-powered farm will begin, the top level of the three-tiered, 1,500-ton pontoon will be home to 40 cows looked after by a robotic milking machine. The device will recognise and adjust itself to fit each individual animal, while waste disposal will be carried out by a remote-controlled roving vehicle.

There will also be two humans – a dairy farmer and a dairyman to run the dairy on the second floor, which will process the milk and make yogurts and other produce to be sold in the farm shop. On the ground floor, a biodigester will turn the cows’ waste into biogas and fertiliser, making the enterprise self-sufficient.

As well as reducing food miles, the farm will serve as an education centre for urban agriculture and a prototype solution for any location where farmland is at a premium.

A city food tour with Bike & Bite (bikeandbite.nl) revealed yet more sustainable aspects of Rotterdam’s food scene. At the sleek and modern Jack Bean (jackbean.nl), close to Centraal Station, I had my first taste of 100 per cent plant-based fast food: a delicious bowl of chilli (I didn’t miss the carne one bit) and a bottle of raspberry soda made with kombucha fermented in the restaurant. We finished with a beer at the Fenix Food Factory (fenixfoodfactory.nl), in a converted warehouse in the hip Katendrecht neighbourhood that has its own brewery and bakery.

I returned to Aloha for a “hyperlocal” dinner featuring guest chefs from Isaac At, a restaurant in Brighton. The aim was to showcase Sussex produce alongside Aloha’s range of Dutch ingredients. Highlights included South Downs lamb served with carrot purée and a spectacularly flavoured, deep-fried whole baby red cabbage with a kimchi velouté sauce and almond purée. 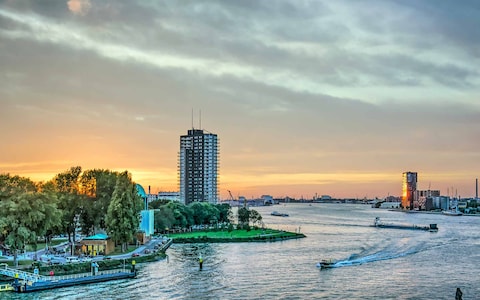 Replete after six courses, I stepped out on to the restaurant’s river terrace to see the Willemsburg Bridge (connecting downtown Rotterdam to the south bank of the city) glowing red in the night. Naturally, it is illuminated by energy-efficient LED spotlights. In this most forward-thinking of European cities, you would expect nothing less.