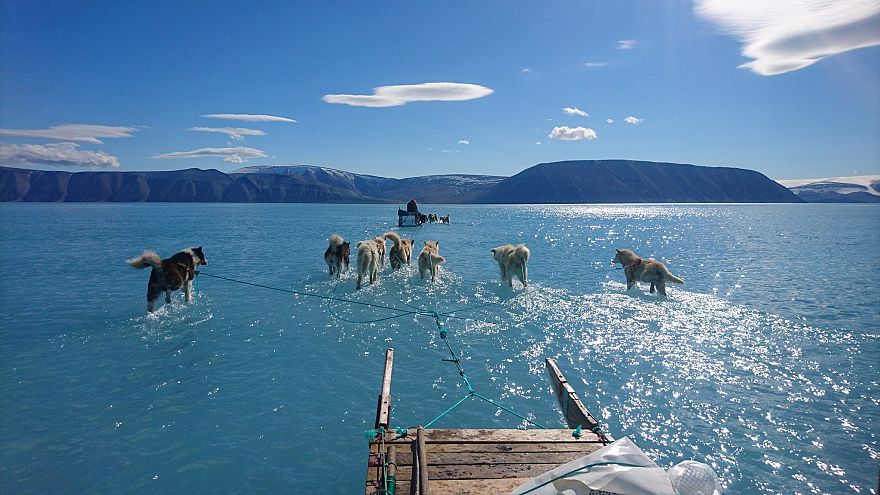 The saying goes that an image is worth a thousand words. Danish climatologist Steffen M. Olsen captured this on June 13 on a routine mission through the Inglefield Gulf in northwest Greenland. Olsen had the difficult task of retrieving measuring devices that had been planted on the ice for the Blue Action mission. But when he set out with his dog sled, he found that the ice sheet was hidden beneath a shallow lake of water.

His incredible photo was shared on Twitter by fellow scientist Rasmus Tonboe and is now trending around the world as a warning about the speed at which Arctic ice is melting. 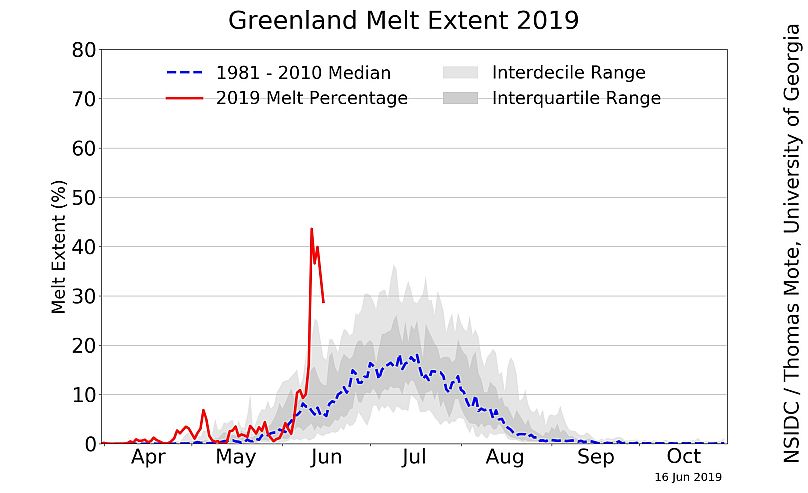 This much melting this early in the summer could lead to further records for Greenland ice loss being broken in 2019.

In 2012, Greenland experienced the most melting on record, when, for a few days, 97% of the entire ice sheet indicated surface melting. Those monitoring the ice sheet say 2019 could rival this figure.

Temperatures in Greenland rose to 40 degrees above normal last Wednesday, and open water now exists in places north of Alaska where it seldom, if ever, has in recent times.

Speaking to Euronews, Professor Jason Box, an ice climatologist at the Geological Survey of Denmark and Greenland, explained the significance of continual global warming.

“This extra fresh water that is flooding into the North Atlantic is disrupting ocean circulation patterns, and we don’t fully understand the consequences, but it could bring stronger storms to northwestern Europe’.

Many regions of the world have experienced extreme weather events related to climate change, such as heat wave in India, the floods in China and the violent storms of Europe in recent days.

On Twitter, Olsen himself also explained that communities in Greenland rely on ice for transport and hunting.

The Danish Meteorological Institute announced last month that the melt season had begun nearly one month earlier than expected, and the second earliest recorded since 1980.

But there are hopes that increased awareness of climate change from Steffen Olsen’s photo could help slow down the effects.

The process of storing carbon appears to be essential to prevent melting on the scale seen in Steffen Olsen’s photo.