Swedish fintech company Doconomy has launched a credit card that tracks the carbon dioxide emissions of purchases, and caps the climate impact of users' spending.

The DO Black credit card directly connects our consumption to the impact it has on the planet, in a bid to encourage us to actively reduce our carbon footprint each day.

Users can make their daily purchases with the DO card, tracking the carbon emissions associated with their spending via the DO app.

The app uses a calculation system called the Åland Index to measure the CO2 produced with every transaction, and allows users to put limits on the climate impact of their spending. 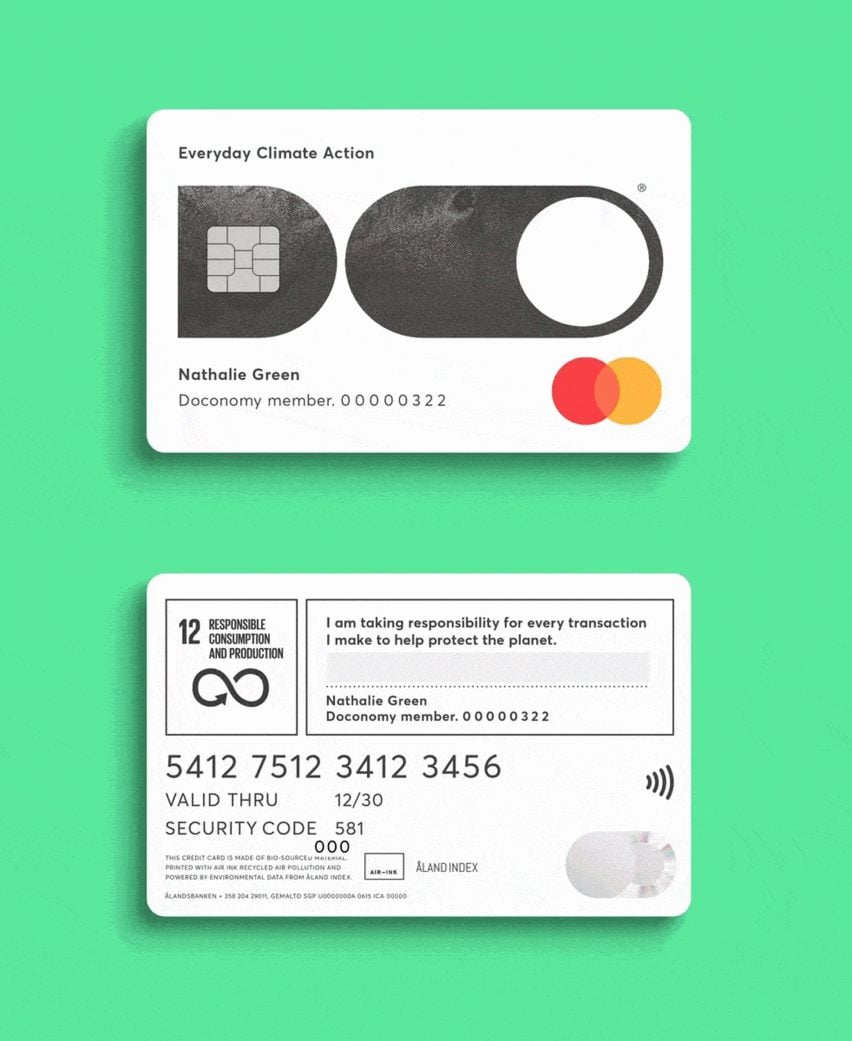 Those who sign up to DO will receive access to a free savings account that helps them understand their carbon footprint, learn about UN-certified climate compensation projects, and discover investment funds that have a positive impact on people and the planet.

The card itself is made of bio-sourced material and is printed with Air Ink – an ink made from recycled air pollution particles, namely the unburned carbon soot that comes out of car exhaust pipes, chimneys and generators.

According to the Paris Agreement, which was signed by the United Nations in November 2016, to avoid an irreversible climate crisis global emissions must be halved by 2030.

"Many companies are already taking steps to lower their emissions, and to create a more sustainable and resilient future," Espinosa continued.

"People are also thinking about the environment in their daily lives, including making more informed decisions about what they buy," she added. "That's why we are pleased to welcome this initiative being undertaken by Doconomy." 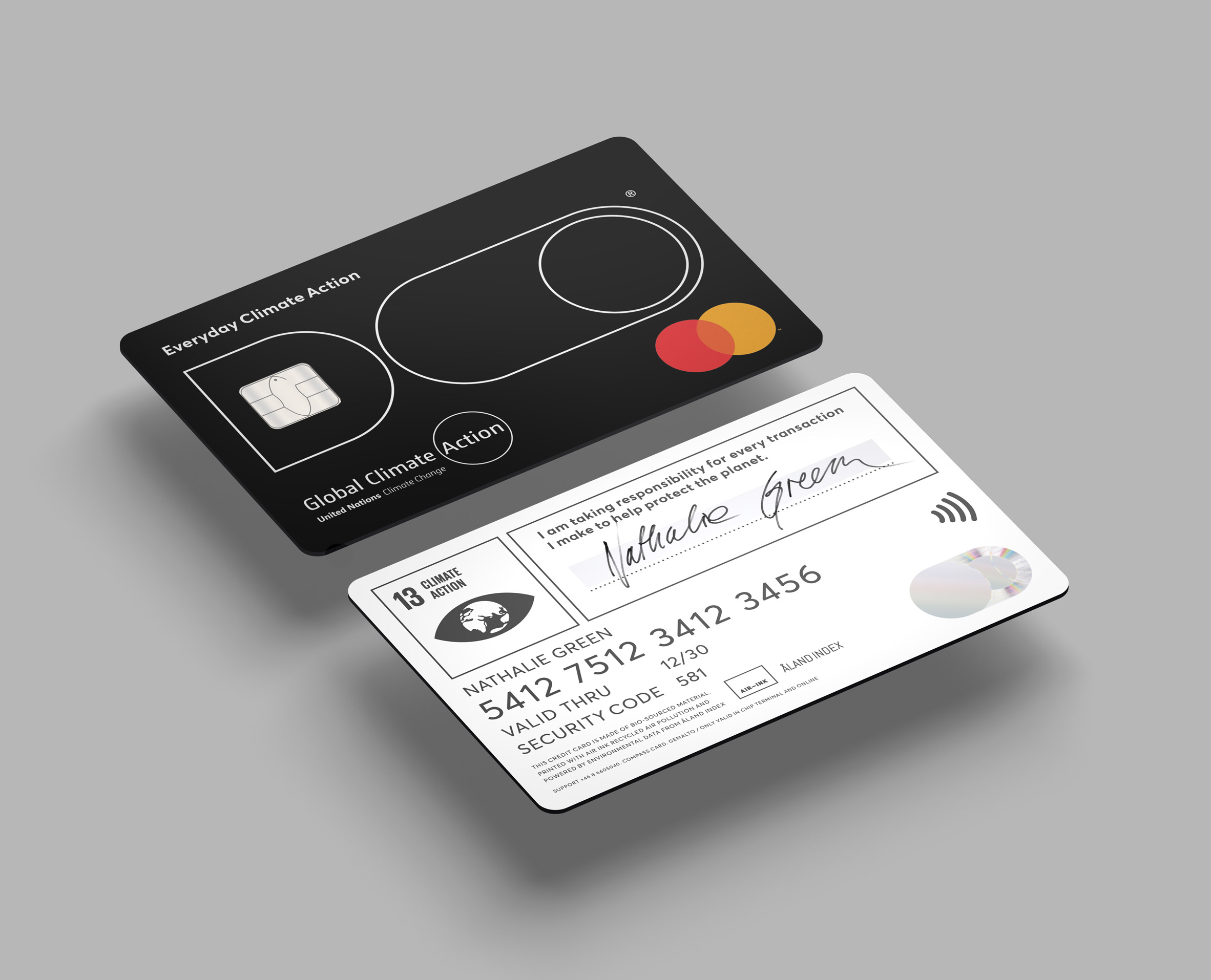 DO card owners will also be invited to compensate for their environmental impact by donating to or participating in projects that meet the criteria of United Nations certified green projects, which contribute to achieving the UN's Sustainable Development Goals.

These projects are implemented in developing countries, and all contribute to global emission reduction, such as the Improved Cook Stove project in Malawi, which replaces traditional three-stone cooking fires with fuel-efficient cook stoves, and the construction of a wind farm in the state of Madhya Pradesh, India. 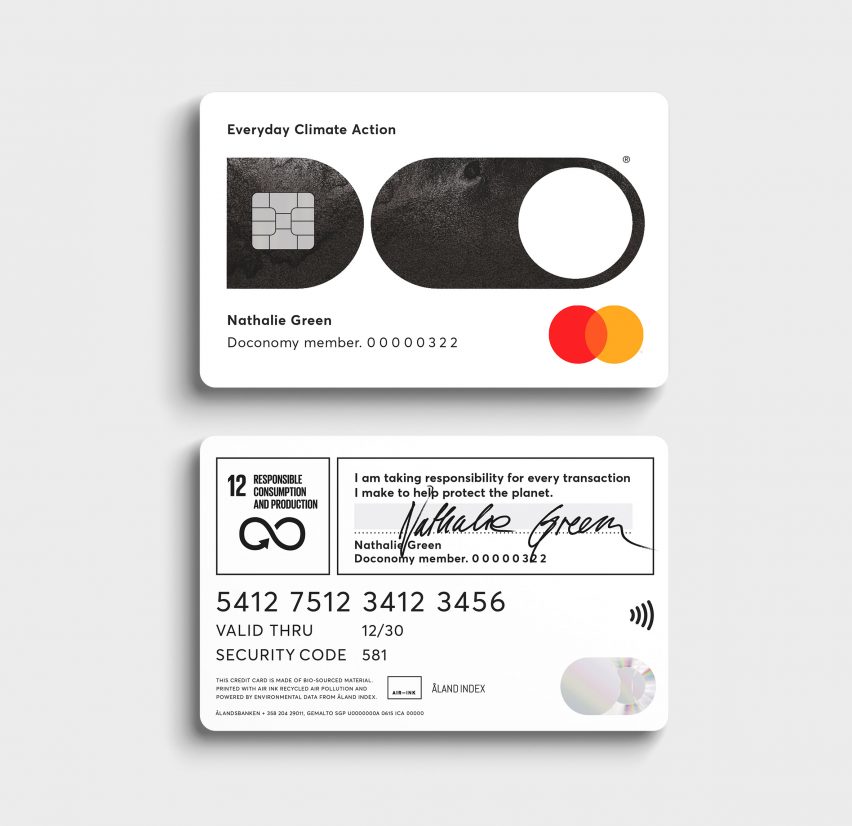 Users will also be rewarded financially for being more environmentally friendly. DO owners can receive refunds – also known as "DO credits" – from connected stores based on the carbon impact of their purchases.

These refunds can then be directed to UN-certified carbon-offset projects, or invested in sustainable funds.

"We all need to come to terms with the urgency of the situation and rapidly move towards more responsible consumption," said Doconomy CEO Nathalie Green. "With DO Black there are no more excuses."

"Through our collaboration with the UN Climate Change Secretariat and Mastercard, DO will enable people to do their part to contribute to the carbon-reduction goals of 2030 and onwards," added Green.

Doconomy is just one of many companies striving to reduce carbon emissions. Last month New York City mayor Bill de Blasio announced plans to ban the construction of glass and steel skyscrapers, in a major bid to tackle the climate-change crisis.

The announcement was made not long after the passing of the city's wider Climate Mobilization Act on 18 April, which comprises a series of bills to reduce carbon emissions and mitigate global warming

Boyan shares some Perspective on The Ocean Cleanup Mission