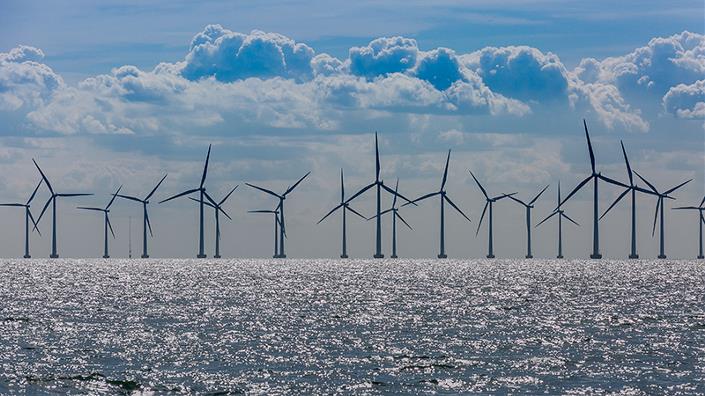 An almost tenfold increase in offshore wind power could be required to help the UK achieve net-zero carbon emissions by 2050.

The massive jump from 8GW today to 75GW in 31 years’ time would require roughly 7,500 turbines, said the Committee on Climate Change (CCC) in its new report for the government. The expanded capacity could reportedly fit within 1-2% of the UK seabed, “comparable” to the area already leased for wind power by seabed managers the Crown Estate.

New technology such as floating installations could also help generate in previously untapped areas, while conventional wind turbines grow bigger and bigger to ma. LM Wind Power and GE recently unveiled a 107m blade, which will be used on 12MW turbines.

Employment in the sector is set to more than double by 2030, said Benj Sykes, chairman of the Offshore Wind Industry Council and Ørsted UK offshore manager.

“In any scenario, offshore wind will be the backbone of the future electricity system,” he said. “The ground-breaking offshore wind Sector Deal means at least one-third of the UK’s electricity will come from offshore wind by 2030. But today’s report says that if the UK is to achieve a net-zero carbon economy we can go much further.

“The CCC is suggesting a tenfold increase in offshore wind capacity by 2050. This is a clear signal to industry and government to aim high when it comes to our renewable energy supply. That’s good news for consumers as offshore wind is one of the lowest cost power sources we have, and good news for jobs in the UK.”

The report, requested by the UK, Scottish and Welsh governments following the IPCC’s special report last year, said the foundations are in place to “deliver key pillars of a net-zero economy”. These include “low-carbon electricity (which will need to quadruple by 2050), efficient buildings and low-carbon heating (required throughout the UK’s building stock), electric vehicles (which should be the only option from 2035 or earlier), developing carbon capture and storage technology and low-carbon hydrogen (which are a necessity not an option), stopping biodegradable waste going to landfill, phasing-out potent fluorinated gases, increasing tree planting, and measures to reduce emissions on farms.”

The growth in low-carbon products and services could provide a boost to UK industry, the CCC said, with potential benefits for exports, productivity and jobs.

Carbon capture ‘a necessity, not an option’

The IMechE welcomes the targets from the CCC, said head of engineering Dr Jenifer Baxter. “The institution has long campaigned for more sustainable engineering across our industries to reduce all pollutant emissions including greenhouse gases.

“We know that many technologies exist that can speed up the reduction in greenhouse gas emissions, but technologies that are clean are not always pollution-free themselves.

“Decisions on which technologies to support should be based on the outputs the technology brings and the full life cycle analysis - they should not be based on ideology or popularity. In order to deliver long term change, it is important that we ensure that our new low-carbon lives are a true improvement on the current infrastructure.

“Our relationship with new technologies and services will continue to change over the next 30 years and we look forward to supporting the UK and regional governments in meeting these targets while continuing to improve the world through engineering.

“Achieving UK net-zero emissions will require every tool at our disposal, including technologies that enable negative emissions. In particular, the report highlights how crucial CCUS (carbon capture, usage and storage) will be to achieving this goal. Whether for hydrogen production or to decarbonise heavy industry, the CCC are correct in saying that ‘CCS is a necessity, not an option.’”