Government advisers have explained how to erase the nation’s carbon footprint. Science dictates that we do it as fast as we can 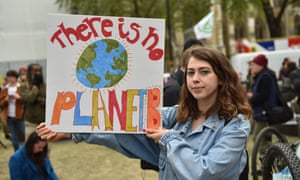 By the end of this year we should expect UK law to mandate net-zero greenhouse gas emissions by 2050. Thursday’s report by the Committee on Climate Change (CCC), which advises the government, sets out not only why this new target is needed, but how it can be achieved. Last year the UN warned of greatly increased dangersif countries do not stick to the lower end of the 1.5-2C of global warming mandated by the Paris agreement. Experts highlighted sea level rises and risks to insect and coral species among problems likely to be seriously exacerbated by an additional 0.5C rise.

This is the reason for governments to set new, tougher targets in advance of upcoming UN climate talks, at which they will be held to account and forced to decide what happens next. At the same time, dramatic falls in the cost of renewable energy and battery storage mean that cutting emissions has become cheaper. The CCC believes it is possible to eliminate the UK’s carbon footprint altogether without investing more than already planned: that is, between 1% and 2% of GDP. So there is some good news, along with the bad.

Costs are concentrated in the power and construction sectors. New energy sources such as hydrogen need infrastructure, while wind and solar must be scaled up. New technologies such as carbon capture and storage require trials. Buildings must become energy-efficient as gas boilers, 1m of which are installed each year, are phased out. Huge numbers of trees need planting, with one-fifth of all agricultural land turned over to forests, peatland or energy crops. People should be encouraged to make different choices, eating less beef, lamb and dairy. The report suggests a target of 2030 for ending the sale of petrol and diesel cars, but then wrongly settles for 2035. Currently, transport emissions are still going up.

As well as a practical and moral case for action, the report makes a strategic one. The UK was a pioneer in climate legislation. Where one country leads, others will follow and such leadership brings power as well as prestige. Without a new target the UK will soon be overtaken (France has a 2050 target for net-zero, although not yet a law; Sweden and Norway have earlier deadlines but less strict rules). Since climate chaos will bring political chaos, limiting it is in the national interest.

A “green new deal” has become popular currency on the progressive side of politics in the UK, US and Spain. This idea usefully links technological and environmental change with the prospect of a renewed social contract and the questions of justice often emphasised by environmentalists. The CCC’s report must have been all but complete before most people had heard of Extinction Rebellion, or seen pictures of the Swedish activist Greta Thunberg with environment secretary Michael Gove. But the extraordinary success of protesters over recent weeks, both in raising awareness and materially altering the climate debate, makes it more likely that targets will be further strengthened, as they have been before and should be again. The 2050 target is not ambitious enough.

A government that purports to accept climate science but promotes aviation, road-building and fracking, while making onshore wind all but impossible and cutting back on subsidies for green energy, deserves to be exposed. To this end, as well as that of helping to shift public opinion, it is crucial that activists, including those opposing airport expansion, as well as politicians, continue their work.

About one thing Extinction Rebellion was absolutely right: people must be told the truth. The brave new world of 2050 need not be a dystopia, even if some damaging effects of warming are now inevitable and the prospect of a second Trump term gives cause for alarm. But if we are to avoid the most dangerous consequences of a warmer world, we must find ways not only to limit and mitigate the risks of physical changes; but also to make political ones. The kind of long-termism that climate change requires is not a good fit with modern electoral cycles – or 24-hour news. Finding ways to counter this, and build the future into our politics, is a challenge not just for politicians, environmentalists and civil society groups, but for human civilisation as a whole.