Stop eating fish. It’s the only way to save the life in our seas

It is the most important news humanity has ever received: the general collapse of life on Earth. The vast international assessment of the state of nature, as revealed on Monday, tells us that the living planet is in a death spiral. Yet it’s hardly surprising that it appeared on few front pages of British newspapers. Of all the varieties of media bias, the deepest is the bias against relevance. The more important the issue, the less it is discussed.

There’s a reason for this. Were we to become fully aware of our predicament, we would demand systemic change. Systemic change is highly threatening to those who own the media. So they distract us with such baubles as a royal baby and a vicious dispute between neighbours about a patio. I am often told we get the media we deserve. We do not. We get the media its billionaire owners demand.

This means that the first duty of a journalist is to cover neglected issues. So I want to direct you to the 70% of the planet that was sidelined even in the sparse coverage of the new report: the seas. Here, life is collapsing even faster than on land. The main cause, the UN biodiversity report makes clear, is not plastic. It is not pollution, not climate breakdown, not even the acidification of the ocean. It is fishing. Because commercial fishing is the most important factor, this is the one we talk about least. The BBC’s recent Blue Planet Live series, carefully avoiding any collision with powerful interests, epitomised this reticence. There was not a word about the fossil fuel or plastics industries – and only a fleeting reference to the fishing industry, which is protected by a combination of brute power and bucolic fantasy.

When you hear the word fisherman, what picture comes to mind? Someone who looks like Captain Birdseye: white beard, twinkly eyes, sitting on a little red boat chugging merrily across a sparkling sea? If so, your image of the industry might need updating. An investigation by Greenpeace last year revealed that 29% of the UK’s fishing quota is owned by five families, all of whom feature on the Sunday Times Rich List. A single Dutch multinational, operating a vast fishing ship, holds a further 24% of the English quota. The smallest boats – less than 10 metres long – comprise 79% of the fleet, but are entitled to catch just 2% of the fish. 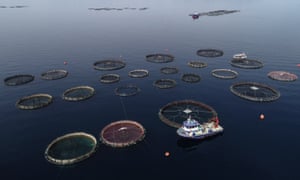 The same applies worldwide: huge ships from rich nations mop up the fishsurrounding poor nations, depriving hundreds of millions of their major source of protein, while wiping out sharks, tuna, turtles, albatrosses, dolphins and much of the rest of the life of the seas. Coastal fish farming has even greater impacts, as fish and prawns are often fed on entire marine ecosystems: indiscriminate trawlers dredge up everything and mash it into fishmeal.

The high seas – in other words, the oceans beyond the 200-mile national limits – are a lawless realm. Here fishing ships put out lines of hooks up to 75 miles long, which sweep the sea clean of predators and any other animals that encounter them. But even inshore fisheries are disastrously managed, through a combination of lax rules and a catastrophic failure to enforce them.

For a few years, the populations of cod and mackerel around the UK started to recover. We were told we could start eating them again with a clear conscience. Both are now plummeting. Young cod are being illegally discarded (tipped overboard) on an industrial scale, with the result that the legal catch in UK seas is probably being exceeded by roughly one-third. Mackerel in these waters, thanks to the scarcely regulated greed of the fishery, lost its eco label a few weeks ago.

The government claims that 36% of England’s waters are “safeguarded as marine protected areas” (MPAs). But this protection amounts to nothing but lines on the map. Commercial fishing is excluded from less than 0.1% of these fake reserves. A recent paper in the Science journal found that the trawling intensity in European protected areas is higher than in unprotected places. These MPAs are a total farce: their only purpose is to con the public into believing that something is being done. 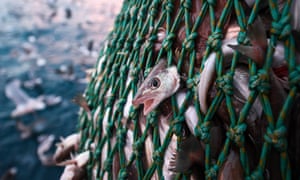 You might have hoped, in view of the European Union’s failures, that Brexit would provide an opportunity to do things better. It does, but it is not being taken. On the contrary, while the EU will introduce a legal commitment to prevent any fish species from being exploited beyond its replacement rate next year, the UK’s fisheries bill contains no such safeguard. There are no plans to turn our “protected areas” into, er, protected areas. The looting of our seas is likely, if anything, to intensify.

What makes all this so frustrating is that regulating the fishing industry is both cheap and easy. If commercial fishing were excluded from large areas of the sea, the total catch would be likely, paradoxically, to rise, due to what biologists call the spillover effect. Fish and shellfish breed and grow to large sizes in the reserves, then spill over into surrounding waters. Where seas have been protected in other parts of the world, catches have grown dramatically. As a paper in the journal PLOS Biology shows, even if fishing was banned across the entire high seas – as it should be – the world’s fish catch would rise, as the growing populations would migrate into national waters.

Nor are the rules difficult to enforce. As the World Wide Fund for Nature has shown, fitting every boat over 10 metres that fishes in UK waters with remote monitoring equipment would cost just £5m. Cameras and sensors would record what the boats catch and where, making illegal fishing impossible. But fitting this equipment is voluntary. In other words, it is mandatory to comply with the law to prevent discards, over-quota fishing and fishing in no-take zones, but it is voluntary to fit the equipment that shows whether or not you are complying with the law. Unsurprisingly, fewer than 1% of vessels have agreed to carry the equipment. Given the vast profits to be made by cutting corners, is it any wonder that this industry keeps driving fish populations – and the living systems they support – into collapse?

There are almost no fish or shellfish we can safely eat. Recent scandals suggest that even the Marine Stewardship Council label, which is supposed to reassure us about the fish we buy, is no guarantee of sound practice. For example, the council certified tuna fisheries in which endangered sharks had been caught and finned; and, in UK waters, it has approved scallop dredgingthat rips the seabed to shreds.

Until fishing is properly regulated and contained, we should withdraw our consent. Save your plastic bags by all means, but if you really want to make a difference, stop eating fish.

Papilio is a wind-powered street lamp that reduces light pollution