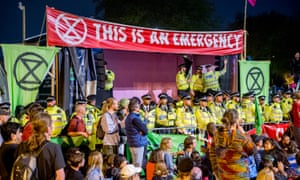 Support for Extinction Rebellion in the UK has quadrupled in the past nine days as public concern about the scale of the ecological crisis grows.

Since the wave of protests began more than a week ago, 30,000 new backers or volunteers have offered their support to the environmental activist group. In the same period it has raised almost £200,000 – mostly in donations of between £10 and £50 – reaching a total of £365,000 since January.

The group said the figures showed the public was waking up to the scale of the crisis, adding that pressure was growing on politicians to act.

“What this shows is that Extinction Rebellion has spoken to people who have been wanting to act on this for such a long time but haven’t known how,” said a spokesperson for the group. “The debate on this is over – ordinary people are now saying it is time for politicians to act with real urgency.”

Diane Abbott backed the demonstrators in a speech to the eco-activists in Parliament Square on Wednesday.

The shadow home secretary told a crowd of up to 100 protesters – one of whom towered above the group on six-foot stilts while others wielded banners – that she acknowledged a “climate emergency”, one of the group’s key demands.

Abbott also emphasised that MPs needed to come together to host a “broad conversation” on one of the activists’ requests to bring the country’s greenhouse gas emissions to net zero by 2025.

She said: “I wouldn’t be in politics if I didn’t think change was possible. If things can change on the issues that I campaigned on when I was a very young woman, I think that things can change … on climate change and we can move towards the 2025 target.”

Abbott suggested meeting Extinction Rebellion for a detailed discussion of policy aims – a proposal met with rapturous applause. She reiterated her commitment to learning and listening to protesters and said that, in the long term, climate change was more important than Brexit.

The Extinction Rebellion spokesperson said the group was also becoming more diverse – attracting more working-class and black and minority ethnic supporters. “But that is definitely a work in progress – there is still more work to do in that area,” she added.

The figures came a day after Greta Thunberg, the 16-year-old Swedish student who sparked a global youth-based movement when she began a “climate strike” outside Sweden’s parliament last year, visited Westminster.

In a speech to MPs, she said: “You lied to us. You gave us false hope. You told us that the future was something to look forward to. You don’t listen to the science because you are only interested in solutions that will enable you to carry on like before.”

Extinction Rebellion’s youth group wrote to MPs on Wednesday, as parliament restarted after the Easter break, pleading with them to act swiftly to address the crisis.

The letter states: “We are writing to ask you to hear the science, to feel the public’s change of heart and to act now to save our futures … Now the time has arrived to stand up and be counted – you are our elected representatives and we need your help.”

More than 1,000 Extinction Rebellion activists have been arrested in the past week in a campaign of mass non-violent direct action to highlight how little time there is to halt manmade ecological breakdown.

Protesters occupied four sites across the capital and staged acts of civil disobedience including blocking roads, disrupting a train line and conducting a protest at Heathrow.

On Tuesday, the group said it intended to carry out further action in the next few days – including blocking roads in and around the City of London on Thursday. It is debating how and when to stop this stage of the protests.

On Tuesday, senior Labour figures backed the protesters, likening them to the Chartists, suffragettes and anti-apartheid activists.

Speaking in response to an urgent question in the Commons, the shadow energy minister Barry Gardiner said alongside the school strikes, the Extinction Rebellion protests were reminiscent of previous struggles.

“All of those victories were won by citizens uniting against injustice, making their voice heard. And Extinction Rebellion and the school climate strikersare doing just that,” he said.

Inside the chamber, the former Labour leader Ed Miliband said the government must declare a climate emergency and introduce a “green new deal”.

Responding for the government, Claire Perry, the energy minister, rejected the idea of a climate emergency – “I don’t know what that would entail” – and said she had reservations about the Extinction Rebellion protests.

She said though she was glad such arguments were being heard, they had caused “disruption for many hundreds and thousands of hardworking Londoners and had required a heavy policing presence.

“I worry that many of the messages we are hearing ignore the progress that is being made, and as such make people fearful for the future rather than hopeful.”