The plastic backlash: what's behind our sudden rage - and will it make a difference?

Plastic is everywhere, and suddenly we have decided that is a very bad thing. Until recently, plastic enjoyed a sort of anonymity in ubiquity: we were so thoroughly surrounded that we hardly noticed it. You might be surprised to learn, for instance, that today’s cars and planes are, by volume, about 50% plastic. More clothing is made out of polyester and nylon, both plastics, than cotton or wool. Plastic is also used in minute quantities as an adhesive to seal the vast majority of the 60bn teabags used in Britain each year.

Add this to the more obvious expanse of toys, household bric-a-brac and consumer packaging, and the extent of plastic’s empire becomes clear. It is the colourful yet banal background material of modern life. Each year, the world produces around 340m tonnes of the stuff, enough to fill every skyscraper in New York City. Humankind has produced unfathomable quantities of plastic for decades, first passing the 100m tonne mark in the early 1990s. But for some reason it is only very recently that people have really begun to care.

The result is a worldwide revolt against plastic, one that crosses both borders and traditional political divides. In 2016, a Greenpeace petition for a UK-wide plastic microbead ban hit 365,000 signatures in just four months, eventually becoming the largest environmental petition ever presented to government. Protest groups from the US to South Korea have dumped piles of what they say is unwanted and excessive plastic packaging at supermarkets. Earlier this year, angry customers in the UK posted so many crisp packets back to their manufacturers, in protest at the fact they weren’t recyclable, that the postal service was overwhelmed. Prince Charles has given speeches about the dangers of plastic, while Kim Kardashian has posted on Instagram about the “plastic crisis”, and claims to have given up straws.

At the highest levels of government the plastic panic can resemble a scrambled response to a natural disaster, or a public health crisis. The United Nations has declared a “war” on single-use plastic. In Britain, Theresa May has called it a “scourge”, and committed the government to a 25-year plan that would phase out disposable packaging by 2042. India claimed it would do the same, but by 2022.

Julian Kirby, a campaigner at Friends of the Earth, told me he had “never seen anything like it in nearly two decades of campaigning”. Friends of the Earth only started a plastic programme in 2016; Greenpeace didn’t have a dedicated plastic team until 2015. A journalist at the Daily Mail, which was one of the first newspapers on the plastic beat, told me that they received more mail about plastic than any other environmental issue (“beats climate change every time,” they said).

And then there is Blue Planet II. Last December, the final episode of the series dedicated six minutes to the impact of plastic on sea life. There was a turtle, hopelessly tangled in plastic netting, and an albatross, dead, from shards of plastic lodged in her gut. “It was the biggest reaction to anything in the whole series,” Tom McDonald, head of commissioning at the BBC, told me. “People didn’t just want to talk about the episode – which is the usual – they were asking us how to fix things.” Over the next few days, politicians fielded calls and received a flood of emails from their constituents who felt moved to action by the programme. People started referring to the “Blue Planet II effect” to explain why public opinion had shifted against plastic so decisively.

All this has added up to a feeling that we might be on the verge of a great environmental victory, of the kind not seen since the successful action against acid rain and CFCs three decades ago. A great wave of public anger is pushing those in power to eliminate a single substance from our collective life – and with big commitments already secured, the signs seem promising.

But getting rid of plastic would require more than a packaging-free aisle at the supermarket and soggy cardboard drinking straws at the pub. Plastic is everywhere not because it was always better than the natural materials it replaced, but because it was lighter and cheaper – so much cheaper, in fact, that it was easier to justify throwing away. Customers found this convenient, and businesses were happy to sell them a new plastic container for every soda or sandwich they bought. In the same way steel enabled new frontiers in building, plastic made possible the cheap and disposable consumer culture that we have come to take for granted. To take on plastic is in some way to take on consumerism itself. It requires us to recognise just how radically our way of life has reshaped the planet in the span of a single lifetime, and ask whether it is too much.

The most astounding thing about the anti-plastic movement is just how fast it has grown. To travel back even to 2015 is to enter to a world in which almost all of the things we currently know about plastic are already known, but people aren’t very angry about it. As recently as three years ago, plastic was just one of those problems – like climate change, endangered species or antibiotic resistance – that everyone agreed was bad, but which few people considered doing much about.

This wasn’t for lack of effort by scientists. The case against plastic had been building for almost three decades. In the early 1990s, researchers noticed that some 60-80% of the waste in the ocean was non-biodegradable plastic, and the amount of plastic washing up on beaches and in harbours was increasing. Then came the revelation that plastic was accumulating in the calm regions between ocean currents, forming what the oceanographer Curtis Ebbesmeyer called “great garbage patches”. The largest garbage patch – Ebbesmeyer reckons there are eight in total – is three times the size of France, and contains some 79,000 tonnes of waste.

In 2004, the scale of the problem became even more apparent when the University of Plymouth oceanographer Richard Thompson coined the term “microplastic” to describe the billions of minuscule bits of plastic that have either resulted from the breakdown of larger plastics or been deliberately made for use in commercial products. Researchers all over the world began cataloguing how these microplastics were finding their way into the organs of organisms, from tiny krill to enormous fish such as tuna. In 2015, a group led by the University of Georgia environmental engineer Jenna Jambeck estimated that somewhere between 4.8m and 12.7m tonnes of plastic was entering the ocean each year, a number they expected to double by 2025.

The plastic problem was mind-bogglingly big, only getting bigger, and it was tough to get people to care. Sometimes alarming stories about plastic did break through into the media and catch the interest of the public – the garbage patch was a media favourite, and every so often there was a new panic about overflowing landfills, or the massive quantities of waste we ship overseas – but it was nothing like today. Roland Geyer, the influential University of California industrial ecologist, told me that between roughly 2006 and 2016, he probably did fewer than 10 interviews about plastic; in the last two years, he has been asked to do more than 200.

What exactly caused this change is a question of great debate. The most plausible answer, and the one that has become the working theory of many of the scientists and campaigners I spoke to, isn’t that the science on plastic reached a critical mass, or that we became saturated with images of adorable sea creatures choking on our waste (although those things are important). It is that, at a deep level, the whole way we think about plastic has been transformed. We used to see it as litter – a nuisance but not a menace. That idea has been undermined by the recent widespread acknowledgment that plastic is far more pervasive and sinister than most people had ever imagined.

The shift in thinking started with the public outcry over microbeads, the small, abrasive grains of plastic that companies began pouring into cosmetic and cleaning products in the mid-1990s to add grit. (Nearly every plastic product has a natural and often biodegradable antecedent – plastic microbeads replaced ground seed kernels or pumice stones.) Scientists began raising the alarm about potential dangers posed to sea life in 2010, and people were shocked to learn that microbeads were in thousands of products, from Johnson & Johnson’s spot-clearing face scrubs, to supposedly eco-friendly brands like the Body Shop.

The realisation that microbeads were pouring down millions of shower drains was a key moment in the public turn against plastic, according to Will McCallum, head of plastics campaigns at Greenpeace UK. “It was a design decision, a design flaw really,” he said. “It led people to ask, ‘How did this happen?’” In 2015, when the US Congress considered a limited ban on cosmetics containing microbeads, it passed with broad bipartisan support. “The issue went from almost zero awareness in the public mind, to a kind of widespread shock,” says MP Mary Creagh, chair of the UK parliamentary Environmental Audit Committee, which investigated microbeads in 2016, eventually leading to a comprehensive ban on their manufacture and sale. 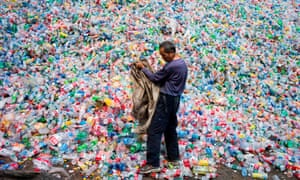 Microbeads were only the beginning. The public would soon learn that synthetic fabrics such as nylon and polyester shed thousands of microscopic fibres with each wash cycle. After scientists started showing how these fibres ended up lodged in the guts of fish, newspapers ran articles with headlines such as “Yoga pants are destroying the Earth”, while eco-conscious brands such as Patagonia scrambled for solutions. (Last year Patagonia began selling a washing-machine insert called Guppyfriend, which it says will catch “some” of the plastic sloughing off its clothing.) Then tyres, which are about 60% plastic, were revealed to shed plastic fibres while in motion, potentially more than microbeads and clothing combined.

Everyday items began to seem like sources of contagion, and there was little any individual could do about it. On the forums of parenting website Mumsnet, there are hundreds of posts about alternative cosmetic products that don’t contain microbeads – but there are as yet no plastic-free tyres. MP Anna McMorrin, who has raised the issue in parliament, told me her constituents were exasperated. “They were telling me ‘I watch what I buy, I recycle, but what can I do when it’s everywhere?’”

According to Chris Rose, a former Greenpeace director who writes an influential blog about environmental messaging, scientists have long thought of plastic as a dangerous pollutant, but until recently the public had a very different view. For most people, plastic seemed easy to grasp. It was the things people purchased and threw away. People could see it and touch it, and in a way it felt like it was under control. Even if people weren’t doing anything about the problem, they felt they could if they really wanted to – and in the most immediate way possible, by simply picking it up and putting it in the bin.