Trump confirms US will withdraw from the Paris climate agreement

The US will definitely withdraw from the Paris climate agreement, President Trump has confirmed.

He made the announcement at an energy conference in Pittsburgh on a stage flanked by men in hard hats.

He described the accord as a bad deal and said his pro fossil fuel policies had made the US an energy superpower.

The earliest he can formally start the process of withdrawing the US from the Paris accord is 4 November.

The pull-out will take effect a year later - the day after the 2020 US presidential election – assuming that Mr Trump is re-elected.

The Paris agreement brought together 195 nations in the battle to combat climate change.

What is in the Paris climate agreement?Paris climate pullout: The worst is yet to come'Trump effect' threatens Paris pact

President Trump said if he couldn’t improve that deal he’d pull out, but diplomatic sources said there’s been no major effort at renegotiation.

In the meantime, the president’s staff have conducted what critics call a seek-and-destroy mission through US environmental legislation.

Mr Trump promised that he’d turn the US into an energy superpower, and he’s attempting to sweep away a raft of pollution legislation to reduce the cost of producing gas, oil and coal.

He categorised former US President Barack Obama’s environmental clean-up plans as a war on American energy. 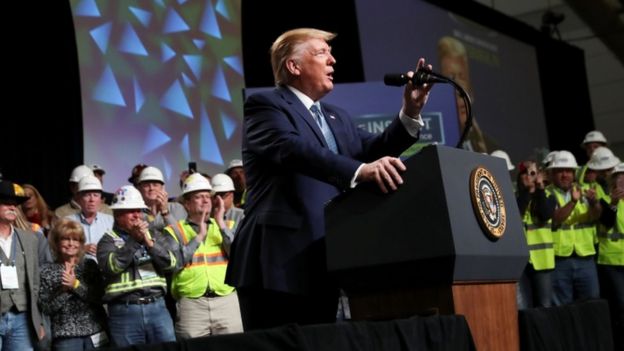 The gas and oil industries are indeed thriving, but Mr Trump’s pledge to resurrect the coal industry has proved much more challenging.

Coal can't compete on price with gas - or, for that matter, with renewables whose costs have plummeted.

Firms are also reluctant to invest billions in coal-fired plants which could have a limited life if the next administration rejoins the rest of the world on climate change.

As coal is the dirtiest fuel, the industry’s woes have held down US emissions, despite the President’s policies. 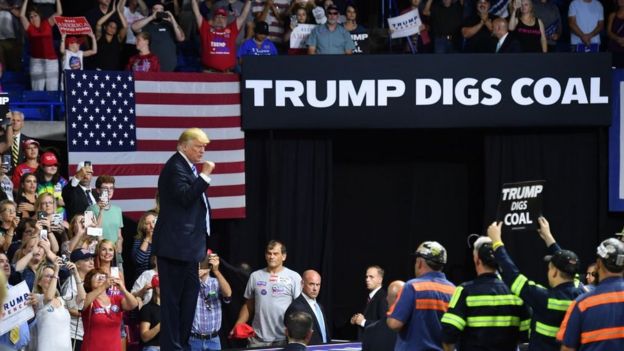 What’s more, many US states, cities and businesses remain committed to the Paris Agreement, whatever Mr Trump does.

Campaigners say these now represent nearly 70% of US GDP and nearly 65% of the US population. If they were a country, this group would be the world’s second largest economy.

The rebels are led by California, which is locked in a battle with the president over his plans to repeal their powers to impose clean air standards.

So far the biggest negative effect of Mr Trump’s stance has arguably been to relax pressure on countries like Brazil and Saudi Arabia to take action of their own.

Environmentalists say Mr Obama would have acted quickly to press Brazil's President Jair Bolsonaro to tackle forest fires in the Amazon, for instance.

Mr Obama agreed in Paris that the US should take a lead on climate change because it’s contributed far more than any other nation to the greenhouse gases already in the atmosphere. 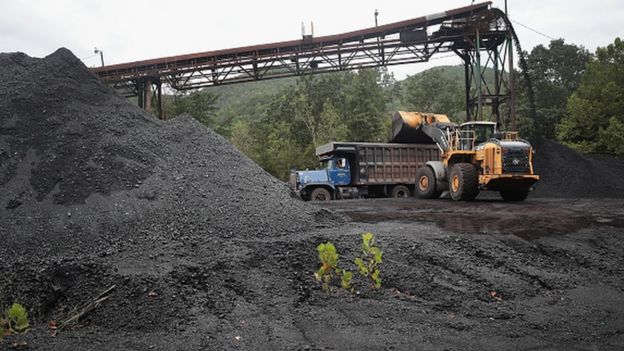 China - the current top emitter - and India still have relatively low per capita emissions, but Mr Trump said they shouldn’t be allowed to phase out fossil fuels more slowly than the US.

He said: "The Paris accord would have been shutting down American producers with excessive regulatory restrictions like you would not believe, while allowing foreign producers to pollute with impunity.

"What we won't do is punish the American people while enriching foreign polluters," he said, adding: "I'm proud to say it - it's called America First." 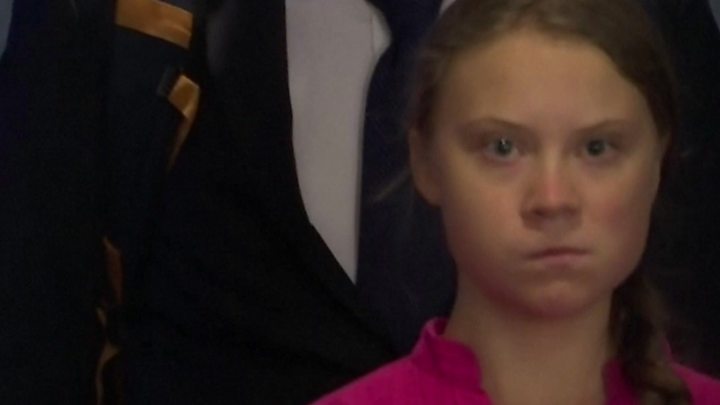 His opponents warn the president is weakening US global leadership on the clean economy with technologies to boost wind and solar power, advanced batteries and energy conservation.

Neera Tanden, from the liberal think tank Center for American Progress, said: "Instead of projecting strength, this action weakens America on the world stage and cedes leadership on climate change and other challenges of our time to countries like Russia and China."

In fact, Chinese leadership on the issue has been muted recently as politicians there focus on avoiding a recession.

A train wreck for US diplomacy

The Beijing government is having difficulty persuading provincial leaders to abandon coal plants for which they have taken heavy loans.

It’s also committed to a massive airport-building programme to stimulate economic growth. Critics say this is incompatible with concern for the climate.

As extreme weather events alarm the world’s scientists, diplomats will meet in a few weeks in Chile to figure out the path ahead.

Andrew Light, a former State Department official during the Obama administration that helped broker the Paris agreement, said the formal withdrawal would make it difficult for the US to be part of the global conversation.

"It will take some time to recover from this train wreck of US diplomacy," he said.