Why Greta Thunberg is now my go-to girl - Stewart Lee 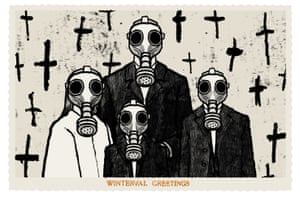 Last time I filed one of these Observer columns it was the March weekend of our first failed attempt to leave the European Union. I felt I was living in a farce. Brexit is the No Sex Please, We’re British of European political integration. It will run and run. Chris Grayling spends 14 million pounds on non-existent ferries to ship insulin into a country Dominic Raab “hadn’t quite understood” was an island. And both of them are wearing their wives’ nighties! And Michel Barnier and his EU negotiating team are coming to dinner!!

But, as I attempt this week’s toxic screed, I feel I am living not in a farce, but in a horror story; a lurid yarn that, if I hadn’t experienced the terrible reality of it myself, I would have dismissed as too bleak to be believable, too obscene to countenance.

But forgive me, my old friend. I am getting ahead of myself. Sit down here by the fire a while and I will tell you a tale of… No, not there. That’s my chair. You sit over there, by the bin. No, by the bin. The bin for Christ’s sakes. Does that look like a bin? That is an umbrella stand, obviously!! Well, it’s got all umbrellas and sticks and that in it, that’s why!!! That, there, that is a bin!!! They are completely different!!!! Are you blind as well as stupid?

Forgive me, old friend. I forgot to take my lisinopril. Aaah, that’s better. Yes, one of the side-effects is flatulence. I do apologise. Now, I believe it was last Tuesday night… excuse me, again… that I settled down to watch John Carpenter’s 1994 film In the Mouth of Madness. Horror and pulp suddenly seem more pertinent to the world of today than worthy TV dramas such as CSI: Crime Scene Investigation, CSI: Miami and CSI: Mugging Inquiries Binned After 24-hour Window Due to Staffing Issues.

Theresa May wouldn't even meet the child warrior, knowing she would melt before her

Drawing heavily on the works of the horror writer and fruit sauce magnate HP “HP” Lovecraft, In the Mouth of Madnessenvisions a society whose citizens believe they have free will, but are following the script of an all-powerful author, intent on turning them against each other, to make their world a playground for unspeakably evil beings hellbent on their ruin.

Did Sir Lynton Crosby spend a million pounds targeting Facebook users through a series of implausible “grassroots” hard-Brexit campaign groups? Britain’s Future and We Are the 52% have both been discussed by the disinformation subcommittee, which is a genuine parliamentary body not an alt-metal band. But were Crosby’s cronies actual organisations or just opinion-morphing constructs made of lies, stock photographs of plausibly normal people pulling serious faces, and exciting fonts?

On Wednesday, it was my younger daughter’s sixth birthday and so, still under that shadow of In the Mouth of Madness, I took her to Kelvedon Hatch secret nuclear bunker in Essex, a perfectly preserved abandoned government shelter that survives as a monument to the impossibility of winning a nuclear war, picnic area and snack bar.

In the bunker’s dressing-up room, the whole family wore the uniforms of gas-masked troopers, tasked with fighting off vengeful irradiated civilians, and posed for selfies. It will make a great politically correct Christmas card this year. “The North London Metropolitan Liberal Elite wish you a Happy Nuclear Winterval.”

In one dimly lit room, a dummy of John Majors reposed on a bed where the PM would have waited to broadcast the nation’s funeral rites. But John Majors is known for his wicked sense of humour and I wondered if he had ever lain in place of his effigy, hiding in plain sight and chuckling, as the traumatised tourists passed by.

Leaflets warning of imminent nuclear war, familiar from my own anxious teenage years, made me oddly nostalgic. Back then, we thought we’d go out with a bang, but climate change science shows us our doom will be a protracted whimper as, over the next few decades, environmental alterations render the world as we know it incrementally unsustainable.

Needless to say, I dragged my children down to Oxford Circus over Easter, travelling by bicycle to avoid the BBC’s Justin Webb accusing me of hypocrisy. I had hoped to get in some good virtue signalling, but I am so out of shape no one recognised me as “Stewart Lee, the world’s greatest living stand-up comedian” (Dominic Maxwell, the Times) and Nanny McPhee was able to snaffle the limelight as usual.

You would have to be dead inside to ridicule the teenage environmentalist Greta Thunberg and yet the usual grindingly algorithimic alt-right controversialists have done just that. And Ken Marsh, the actual genuine chairman of the real Metropolitan Police Federation that exists, described Greta’s followers on LBC as people “eating their lentil souffles that they are all doing”, like an incoherent baby writing a satirical song about hippies for Nationwide circa 1983.

Theresa May wouldn’t even meet the child warrior, knowing she would melt before Greta’s Scandinavian certainties, just as in In the Mouth of Madness, the insurance fraud investigator John Trent (Sam Neill) remains incarcerated in an asylum rather than confront the horrible truths beyond its walls.

I’ll level with ya, True Believers! Inspired by In the Mouth of Madness, I had hoped to write an entire column in the style of a 19th-century horror writer. But I gave up. My youngest flushed a whole apple down the toilet last night and I lost an evening’s writing time in the fallout.

But Greta Thunberg has made everything buzz with hot fuzzy meaning. And there was one line in In the Mouth of Madness, that Sam Neill’s character says while drawing crucifixes on the wall of his padded cell, that just jumped out – “Every species can smell its own extinction.” You go, girl!